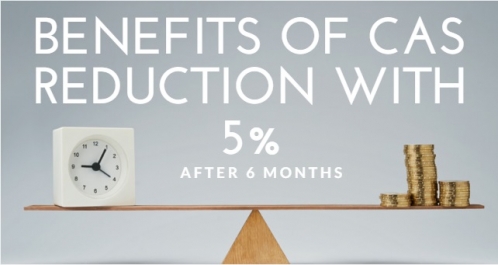 The tax measure of reducing CAS by 5%, applicable to incomes starting with October 2014, had a direct impact on salary costs, but the effects were different for each employer.

For example, for an employee with a gross monthly income of 3,000 RON, an employer saved 150 RON per month after the CAS reduction, the total salary cost decreasing from 3,834 RON to 3,684 RON / month. Thus, after 6 months, the employer gained a 900 RON reduction in salary costs for each employee. 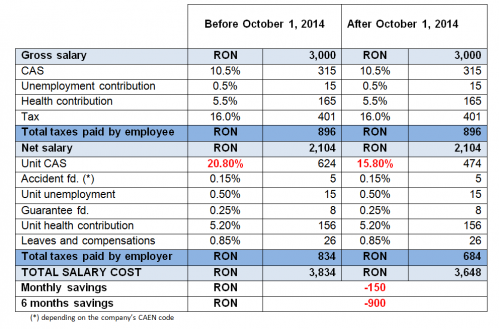 On the other hand, small businesses, with employees working for minimum wage, showed a reduction in salary costs only between October and December 2014, and starting with January 2015 the effects of the CAS reduction were practically annulled due to the increase of the minimum wage, from 900 RON to 975 RON.

Thus, compared to September 2014, when for a 900 RON monthly salary the total salary cost was 1,150 RON, for salaries paid by employers starting with January 2015 they had an additional cost of 46 RON / month. Basically, we can see that 6 months after the CAS reduction the employer didn’t benefit from reduced labor costs, but rather by an overall increase of 3 RON / employee.

„We can therefore say that the positive effects of the CAS decrease are felt particularly in companies offering high and very high salaries, namely in areas such as finance, IT or oil & gas, while companies offering close to minimum wages had increases in labor costs, compared to September 2014”, said Andreea Paun, Payroll Supervisor Accace.

The money saved from the CAS reduction, directed towards salaries, not investments

The companies that benefited from surplus cash due to the reduction of CAS reacted differently to this measure, in most cases employers deciding not to make further investments, but rather use the money saved from the CAS reduction to pay monthly salaries.

“Although on the short term companies didn’t invest the money they saved, in the next period and on the long term this will be reflected in measures such as creating new jobs, providing performance benefits to employees or making investments in equipment and technology. Moreover, the measure of decreasing the CAS owed by the employer is truly appreciated by foreign investors, who hope that this will not lead to the future increase of other taxes to cover this reduction”, Andreea Paun added.