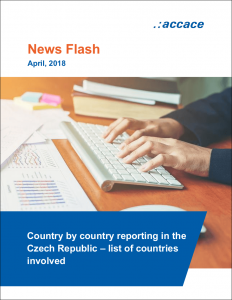 As we previously informed you a new tax filing obligation Country by Country Reporting (also referred to as “CbCR”) has been introduced in the Czech Republic through an amendment to Act No. 164/2013 Coll. on International Cooperation within Tax Administration. For further information please refer to our article from October 2017.

On 31 January 2018, Ministry of Finance of the Czech Republic published a long-awaited list of countries involved in CbCR. Until that date, it was certain that all EU member countries (as the CbCR obligation was also transposed to EU countries national legislatives though Directive No. 2016/881/EU) and USA (with which the Czech Republic conducted a bilateral Agreement on exchange of Country-by-Country Reports) were involved in the CbCR. However, information on which other countries are involved in CbCR was not published by this date.

In case the Czech company finds out that it has notified as a reporting entity a company based in a country which is not listed as a country engaged in CbCR for the respective reporting period the following steps should be taken:

The companies of the multinational group shall choose a representative entity located in a country involved in CbCR for the respective reporting period which will subsequently submit the Country by country Report on their behalf.

The information contained in the Country by Country Reports should enable the Tax Authorities to verify the correctness of transfer pricing set up within particular group and identify any possible risks. Currently, data are being collected by the Tax Authorities in each jurisdiction involved. Based on OECD information, a first exchange of data for the reporting period starting from 1 January 2016 should occur in June 2018 (the exchange of the data for reporting period starting from 1 January 2017 is scheduled for March 2019).

We recommend that you make sure that the entity filing the Country by Country Report on behalf of your group is based in the country which was involved in CbCR for the respective reporting periods. In connection with the planned exchange of information obtained through the CbCR notification, we encourage you to pay close attention to the area of transfer pricing.

Do you want to learn more about CbCR in the Czech Republic? Contact us!

2020 payroll calculator for the Czech Republic