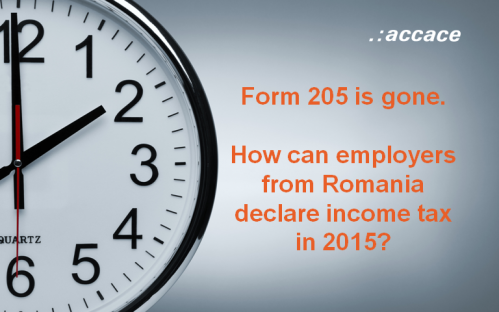 If we consider 2013 to be the starting point for the “modernization” of tax records, we can say that within three years the Romanian state has succeeded in transferring this information into Declaration 112. Thus, the declaration of all taxes included in the payroll process were unified in a single monthly tax form, and Romanian employers have been exonerated of the obligation to submit one more tax form just for the income tax, even if it was an annual one.

In the first phase, in 2013, the tax records were transformed into Form 205, which is also the moment when Romanian employers had the opportunity to submit the form online for the first time, on ANAF’s portal, using an electronic signature.

Then, in 2014, the regulations introduced by ANAF through Order of the Ministry of Finance, the Ministry of Labor and Ministry of Health no. 1977/2757/1580/2013, published in the Official Gazette no. 57 of January 23, 2014, helped employers by establishing that the tax calculated and withheld for each income beneficiary will be made monthly through Declaration 112.

This was the final step, which made it possible to declare information regarding tax for each income beneficiary and taxes related to social contributions of employers and employees in a unified way. This resulted in the possibility to declare all this information using a single form.

Starting with incomes in 2015, Form 205 disappears from the list of declarative obligations for employees, all data regarding tax deductions being registered in the state system using the content in form 112, which must be submitted monthly. However, for incomes in 2014, employers still had the obligation of submitting Form 205 as well.

The entire streamlining process described above was highly appreciated by employers, as well as the fact that now there is a single reference point for declaring monthly social contributions and that contributions regarding tax withheld for each income beneficiary is more accurate when it comes to verifying and validating this data, both in the case of the employer and the employee.

Accace points out that employers still have the obligation of issuing, per employee request, an income statement regarding income in the previous year, a document whose form and content vary from one company to another, but must include the following elements: identification data for the taxpayer, the income received during the year, personal deductions, as well as calculated and withheld tax.