Bucharest, November, 2014 – According to Accace, one of the leading outsourcing and business advisory companies in Central and Eastern Europe, the manufacturing industry is offering among the most tax incentives and subsidies for companies on the local market, but other industries, such as IT, agriculture, energy and services also offer significant benefits in this regard. 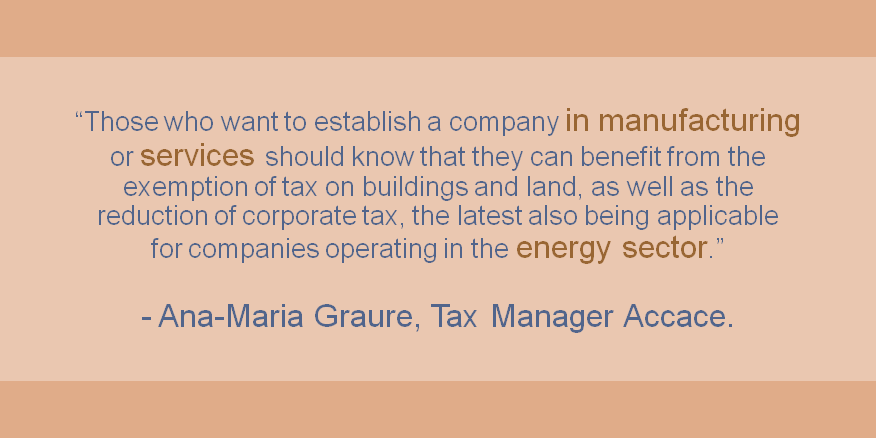 Therefore, those who want to establish a company in manufacturing or services should know that they can benefit from the exemption of tax on buildings and land, as well as the reduction of corporate tax, the latest also being applicable for companies operating in the energy sector.

In addition, in manufacturing, as well as in agriculture, export subsidies are being offered. Another tax incentive available in production, as well as in IT and services, is the one related to the professional reconversion of the workforce.

Accace also point out that granting tax incentives for hiring special categories of workers, such as day laborers, is found especially in agriculture, services, manufacturing and energy, while IT companies enjoy tax exemptions on incomes from wages of programmers. State aids for job creation are also granted for IT companies, as well as those in manufacturing, services and energy.

Agriculture should not be ignored either, being the only one of these domains where tax facilities are provided in the form of exemptions from social security contributions.

Other tax incentinves found in all these industries include tax exemption on reinvested profit, exemption from VAT, deduction of expenses for research and development activities, rescheduling of tax obligations, aid for preparing a business plan, as well as incentives for hiring unemployed people, graduates, people with disabilities or people coming from underpriviledged environments.

„The most important thing for a company is to analyze the business impact it wants, so that later it can analyze and attract the available tax incentives and subsidies that are able to bring the desired result. Obtaining them can be easy in some cases, by simply applying the law, but most of the times you have to follow specific conditions and rules, as well as to prepare an entire documentation, which can make the process of accessing such facilities and subsidies very difficult or even impossible”, said Ana-Maria Graure, Tax Manager Accace in Romania.