Bucharest, June 30, 2014 – Romania is the only country in the region that doesn’t tax the income of IT employees, while the highest tax rate, of 32%, is recorded in Poland, for IT employees with annual incomes of more than 20,500 EUR, according to an analysis made by Accace, one of the leading outsourcing and business advisory companies in Central and Eastern Europe.

The tax exemption measure applicable to persons providing software development activities was first introduced in Romania in 2001 and the clear eligibility conditions were established subsequently. In 2013, one of the most important changes to the law appeared, namely the increase from 6 to 14 of the number of majors accepted for the state to grant the income tax exemption, which include Applied Automation and Informatics, Multimedia Systems Engineering, Economic Cybernetics, as well as Computer Physics, Computer Chemistry, Technology and Telecommunications Systems, Remotes and Transport Electronics, etc.
Thus, analyzing the situation of tax exemptions granted in other countries in the region, such as Poland, the Czech Republic, Slovakia, Hungary and Ukraine, we can see that Romania is the only country where IT employees benefit from fiscal facilities in terms of tax and social contributions applied to wages. 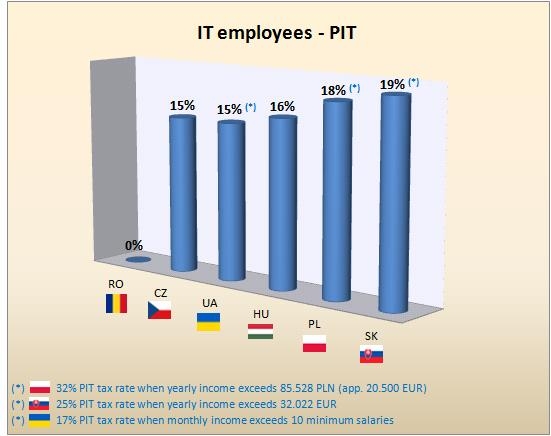 In comparison, in Poland and Slovakia, for example, the employees in the IT sector not only do not benefit from tax exemptions granted by the state, but because they are among the highest paid employees in the country, their income is subject to a tax of 32% and 25% respectively, for employees who exceed annual wages of 20,500 EUR and 32,000 EUR respectively.

„The competition in the IT sector in the region is fierce, the difference being made especially by labor costs. For this reason, the states in the region are getting more and more involved in providing incentives for IT companies. Maitaining tax incentives in Romania, as well as identifying and providing new incentives for the IT industry will certainly ensure the increase of employment, competitive wages, the continuous development of the IT sector and the attraction of foreign investment in the national economy”, explained Andreea Paun, Payroll Supervisor Accace în România.

Savings of approximately 300 EUR / month per employee for IT companies

Currently, in Romania, for a negotiated net salary of 1,000 EUR / month for a tax-exempt programmer, the employer has a labor cost of 1,530 EUR, compared to the total cost of 1,822 EUR if the 16% tax would be included. 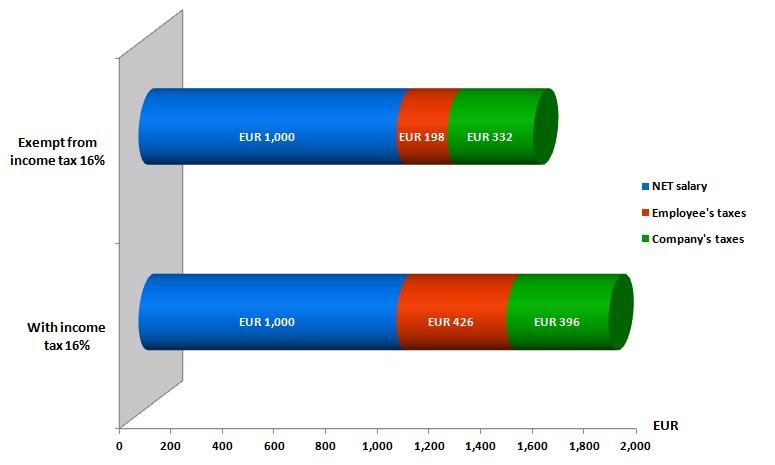 Basically, for a tax-exempt IT employee, the company saves 292 EUR / month, which means that for 50 employees, of which 35 are tax-exempted, the company would save a total of 10,220 EUR.

Thus, the tax exemptions granted in Romania have a positive impact both in the stimulation and retention of IT employees, but more than that, through the savings it generates for employers, they are oriented towards attracting more and more foreign investors in this domain, who through their activity are contributing to the economic development and the decrease of unemployment by creating new jobs.