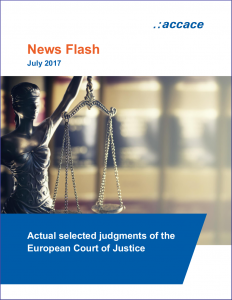 We would like to draw your attention to the most interesting judgments of the European Court of Justice (hereinafter the „ECJ“) on tax matters, which were decided during Spring  2017.

In the case C 699/15 Brockenhurst College, which was ruled by the ECJ on 4 May 2017, the ECJ dealt with a question, whether according to the Article 132(1)(i) of the Council Directive 2006/112/EC, it is possible to consider restaurant and entertainment services supplied by students to third parties as to be „closely related“ to the main supply of education and thus, not being a subject to value added tax (VAT).

This establishment offers courses for students who have possibility to train their theoretical knowledge in the restaurant which is managed by teachers. The restaurant is opened only to a limited public (friends and family of students) and this, if the condition of the booking of at least 30 servings is met and the price charged is reduced, which in relation to the meals, covers approximately 80% of the real costs. Based on this, it is apparent that the establishment is not incorporated for purpose of obtaining an additional income, it does not compete with commercial enterprises, its activity is done in public interest and the practical training is needed for qualification of the students.

Under these circumstances, the ECJ ruled that those restaurant services are closely related to the main supply of education and thus, those services are exempted from the VAT.

Right to deduct the VAT from an invoice issued under the ordinary tax system, instead of applying the reverse charge mechanism

In the case C-564/15 Tibor Farkas, which was ruled by the ECJ on 26 April 2017, the ECJ dealt with a possibility to deduct VAT from an invoice, which was issued wrongly while the seller applied the ordinary tax regime. The seller issued the invoice with VAT instead of applying reverse charge mechanism. The seller paid the VAT indicated on the invoice to the Hungarian tax authority.

The Hungarian tax authority decided that Mr. Farkas, as a purchaser, has an outstanding tax liability, rejected his request for a refund of the VAT paid to the seller, and imposed a tax penalty in the sum of approximately 50% of his tax liability.

The ECJ decided that Council Directive 2006/112/EC as well as the principles of fiscal neutrality, effectiveness and proportionality do not preclude the refusing of purchaser´s right to deduct VAT, which he paid to the seller when that tax was not due, on the basis of an invoice drawn up in accordance with the rules of the ordinary VAT regime, where the relevant transaction came under the reverse charge mechanism, and the seller paid that tax to the Treasury. However, the ECJ also stated that these principles require that in the case, that the purchaser cannot receive from the seller the refund of the unduly invoiced VAT or it is excessively difficult, especially in the case of the insolvency of the seller, the purchaser can address his requests for tax refund to the tax authority directly.

According to the ECJ, in this case there was no evidence of tax evasion, and the seller, which issued the invoice with a wrong VAT regime, paid the VAT to the state treasury. So, it is apparent that the Treasury did not suffer any loss as a result of the fact that the invoice was issued under the ordinary tax system, instead of the reverse charge mechanism.

The ECJ also dealt with the question of adequacy of tax penalty and decided, that the principle of proportionality must be interpreted in the sense, that it prevents the local tax authorities to impose a tax penalty of 50% of VAT in such situations to a taxable person where those tax authorities did not suffer any loss of tax revenue and there is no evidence of tax evasion, this being a matter for the national court to determine.