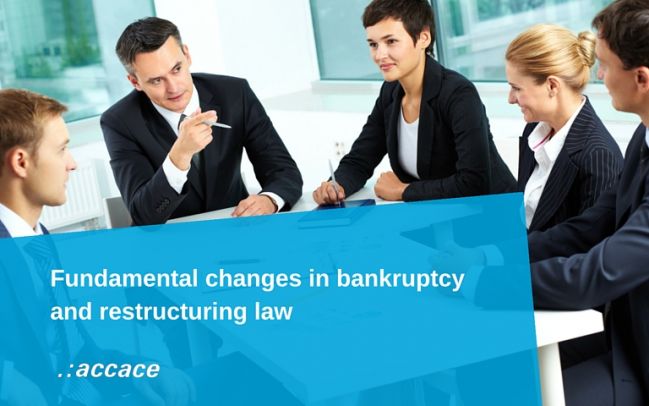 On January 1st 2016 the Act on Restructuring dated May 15th 2015 (Dz.U. z 2015 r. poz. 978) came into force. Previous Act on Bankruptcy and Reorganization remains in force with the its name changed to Bankruptcy Law. As of January 1st all provisions referring to reorganization proceedings and bankruptcy proceeding with a possibility to make an arrangement were repealed and now this matter is governed by the new Act on Restructuring.

Four ways to make an arrangement

The difference between them is the scope of protection granted to the debtor and the role of the court in the proceeding. First two introduce simplified procedure, with the minimized role of the court. The arrangements regarding reorganization plan are left mostly to the debtor and his creditors. The third procedure is arrangement proceeding and it is meant as a replacement of the previous regulation. The remedial proceeding involves complex reorganization under the strict supervision of the court. Multiple procedures allow for flexible solutions which may be chosen by the entrepreneur according to severity of financial problems and the condition of the business.

The new definition of insolvency

According to the new regulation there are 2 situations when the debtor can be declared insolvent.

Secondly, the debtor is insolvent when his pecuniary liabilities exceed the value of his assets for a period of over 2 years.

Furthermore, from January 1st the debtor has to file the bankruptcy petition within 30 days from the day on which grounds for the declaration of bankruptcy arose. Previously this period amounted to 14 days only.

The new Act includes provisions on the establishment (in 2018) of the Central Reorganization and Bankruptcy Register. The register will contain information about bankruptcy and restructuring proceedings. It will be also used to announce court resolutions and other information on the matter of ongoing proceedings. The standard forms of official letters will be made available on the website of the Register. There will be also a possibility to file motions and other documents electronically, which will lower the cost of proceeding.

The State Treasury equal to other creditors

New provisions abolish the privilege of satisfying public burdens. Consequently the position of the State Treasury will be equal to the position of other creditors. It is not, however, an absolute principle. The claims of payment of social contributions arrears for the last 3 years before the declaration of the bankruptcy are excluded from this general rule.

If you have questions regarding this subject, contact our experts!

Read more about other legislative changes in CEE: