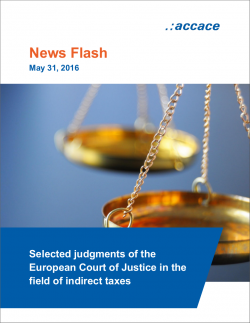 We would like to draw your attention to the most interesting verdicts of the European Court of Justice (hereinafter also as „ECJ“) related to indirect taxes.

Right to deduct VAT despite free use of capital goods

In the case C-126/14, the ECJ dealt with the question whether input VAT can be deducted from construction of recreational path which has been provided for public use free of charge.

In this case the taxable person claimed deduction of input VAT on goods and services purchased for purposes of construction of educational path which has been provided for public use for free, however this taxable person has planned to provide the visitors of the educational path with paid services, such as sale of food, drinks and souvenirs and entrance fee for paid attraction and swimming pools.

The taxable person in this case is allowed to deduct the input VAT incurred with acquisition or production of certain capital goods for purpose to perform economic activity that is connected with rural and recreational tourism, which is on one side used by the public free of charge, but at the same time may be a means of carrying out taxable transactions, and this if direct and immediate link between input transactions and one or more output transactions (from which right to deduct VAT arises) or link with the economic activity of the taxable person can be proven.

Deduction of VAT on import

In the case C-187/14, the ECJ dealt also with the question whether a transporter of goods has a right to deduct import VAT on transported goods which has to be paid by him/her, if he/she is neither an importer nor owner of the goods, and he/she has merely carried out the transport and customs formalities as part of his/her activity as a transporter of freight subject to VAT.

In this case the ECJ did not allow the deduction of VAT for the logistic company which transported goods from Denmark to Sweden for the customer. According to the ECJ a right to deduct the input VAT arises only in the case that cost of the input service is directly incorporated either in the cost of particular output transactions or in the costs for goods and services supplied by the taxable person as part of his economic activities.

Since the value of the transported goods is in this situation not a part of the costs making up the price invoiced by a transporter, the conditions for VAT deduction are not met in this present case.

In the case C-277/14 concerning a Polish taxable person, the ECJ decided that the taxable person has a right to deduct a VAT which was paid for goods (diesel fuel in the present case), and this despite the fact that according to the national law the Tax Office has regarded the supplier as a non-existent trader and it is not possible to establish the identity of the actual supplier of the goods.

The supplier was in this case a Polish company, which has been registered at company register, however in the light of criteria governed by the Polish law was regarded as the non-existent trader in the time of delivery of the fuel. The finding that the company was a non-existent trader was based on the overall evidence, including the fact that the company was not registered for VAT purposes, did not submit tax returns, did not pay any taxes and was not allowed to sell liquid fuels. Moreover, the building designated in the company register as being its corporate seat was in a dilapidated state, making any economic activity impossible.

According to the ECJ the right to deduct the VAT won´t arise, if on the basis of objective factors and without requiring the recipient of the invoice to carry out checks which are not his responsibility, it will be proved that this taxable person knew, or should have known that the transaction was a part of a VAT fraud – this is a matter for the referring court to determine.

In the present case, the invoices related to the dispute transactions included inter alia quantity and nature of the goods supplied, amount of the due value added tax as well as the name of the supplier, his tax identification number and address of the company seat. Please note that in the judgment of the ECJ is also stated, that in the present case also other material conditions for VAT deduction were met (as for example that the taxable person used purchased goods, as inputs, for his own taxed output transactions).

VAT in the case of purchased but not used air tickets

In joined cases C-250/14 and C-289/14, the ECJ dealt with the question related to the taxable transaction and tax chargeability in the case of purchased but not used air ticket.

The airline company Air France provides domestic air passenger transport services which according to the national law are subject to VAT.

In the case of sale of air tickets issued but not used by their owners, Air France did not pay back the sums (including VAT) to the passengers and ceased paying to the Treasury VAT on the sale of such tickets arguing that in these cases it is only a contractual compensation for harm suffered by the company. The case concerned non-refundable tickets which were no longer valid as a result of customers being ‘no-shows’ at boarding, and, also, invalid exchangeable tickets which were not used during their period of validity.

The ECJ stated that it is not possible to treat the sum retained by the airline company as compensation for possible harm suffered by them as a result of a passenger’s ‘no-show’ which is not subject to VAT.

The ECJ judged also the circumstances when the air tickets are sold in the name of and on behalf of another person under the terms of franchise agreement. Air France was responsible for marketing and ticket management on the routes operated as a franchise by Brit Air. For the tickets sold but not used as a result of purchaser ‘no-shows’ at the time of boarding or the expiry of the validity of the ticket, Air France paid to Brit Air the annual lump sum compensation calculated as a percentage of the annual turnover (including VAT) received from the routes operated as a franchise. Brit Air did not subject that sum to VAT.

Read more about other legislative changes in Slovakia: