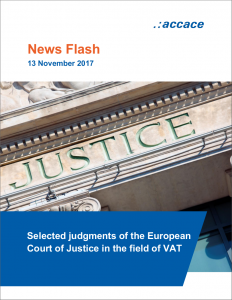 The judgments concern the input VAT deduction by private investors in respect to construction projects, classification of leasing contracts on tangible assets for VAT purposes, as well as exemption of services related to the import of goods.

In the case C-132/16 Iberdrola, which was ruled by the ECJ on 14 September 2017, the ECJ dealt with the question of entitlement to VAT deduction according to general rules for input tax deduction by a company Iberdrola that is a private investor (developer).

The subject of the dispute was deduction of input VAT from the reconstruction works on the waste-water pump station, as this reconstruction was provided to Carevo free of charge.

The ECJ considered in this case as necessary to examine whether there is a direct and immediate link between the reconstruction service and taxable output transaction performed by Iberdrola or that undertaking’s economic activity.

In this case, the ECJ ruled that it is possible to prove the direct and immediate link between the reconstruction works on the waste-water pump station belonging to the municipality of Carevo and taxable output transaction performed by Iberdrola since the service was supplied in order to allow the realization of the construction project.

The fact that Carevo also benefits from this service, cannot justify the rejecting the entitlement to deduct tax at Iberdrola´s end. It is important that the input reconstruction service is a main component of the costs of taxed output transaction by Iberdrola.

On the other hand, if the reconstruction works on this waste-water pump station would be done beyond that which is necessary for that purposes, the existence of the direct and immediate link between this service and the taxed output transaction by Iberdrola (construction of the building) would be partially broken, and the right to deduct would be thus recognised by Iberdrola only for the input VAT levied on the part of the costs incurred for the reconstruction of the pump station which is objectively necessary for Iberdrola to be able to carry out its taxed transactions.

Finance lease of tangible assets with an option to purchase – supply of services or goods?

In the case C-164/16 Merceds Benz Financial Services UK (MBFS), which was ruled by the ECJ on 4 October 2017, the ECJ dealt with the classification of a leasing agreement on motor vehicles with an option to purchase called “Agility” for the VAT purposes.

In addition to the above-mentioned type of contract, MBFS offers for financing the use of motor vehicles also following types of contract:

Common feature of Hire Purchase and Agility agreements is that they both provide for a transfer of ownership after termination of the contract, but on different terms. Agility agreement is recommended to customers who are not decided if they want to purchase or not, but are opened to have a purchase option. Under an Agility agreement, monthly instalments are, as a rule, lower than under a Hire Purchase agreement; total instalments thus represent only approximately 60% of the vehicle sale price, including the cost of financing. If the user wishes to exercise the option to purchase the vehicle, he must therefore pay approximately 40% of the sale price. Approximately 50% of all lessees choose the option to purchase.

With regard to VAT, it is not disputed that the ‘Leasing’ agreement falls within the category of ‘supply of services’ and, therefore, is subject to tax on each monthly instalment. Nor is it disputed that, conversely, the ‘Hire Purchase’ agreement constitutes a ‘supply of goods’, consequently VAT is chargeable in full upon the handing over of the vehicle, the taxable amount being the total price of the supply.

The subject of the dispute was the Agility agreement. According to MBFS this type of agreement had to be regarded as a ‘supply of services’ because it does not necessarily provide for a transfer of ownership, therefore VAT was chargeable only on each monthly instalment. On the other hand, the Tax Office argued the ‘Agility’ agreement, like the ‘Hire Purchase’ agreement, constitutes a ‘supply of goods’.

The ECJ has supported opinion of the MBFS that in this particular case Agility agreement should be classified as supply of services. However, it is also clear from the judgement of the ECJ that the leasing contract with an option to purchase may in certain circumstances be classified as a supply of goods, when it is possible to deduce under the financial terms of the contract, that application of the option would be the only economically rational choice that the lessee will have in a certain situation as long as the contract is fulfilled until its end. Verification is than the responsibility of the national court.

Exemption from VAT of services related to import of goods

In the case C-273/16 Federal Express Europe (FedEx), which was ruled by ECJ on 4 October 2017, the ECJ dealt with the exemption from VAT of services related to import of goods. Services provided by FedEx include receiving international consignments of a total value not exceeding EUR 22 and subsequently delivering them to recipients in Italy.

The ECJ dealt with a question, whether Article 144 in conjunction with Article 86(1)(b) of the Directive 2006/112/EC on the common VAT system must be interpreted in the way that the only condition justifying non-taxation for VAT purposes of ancillary services covering national transport services is that their value is included in the taxable amount at the time of importation of goods, whether they were or were not actually declared. The related Articles of the Directive are implemented in Slovak legislation in Section 48/8 in conjunction with Section 24 of the applicable VAT Act.

The ECJ, taken into consideration the above-mentioned articles of the Directive, decided that ancillary services including transport services related to the final importation of goods must be exempted from VAT, provided that their value is included in the taxable amount, even though they were not subjected to VAT at the customs stage at the time of importation.

Let’s talk about how we can work together in Slovakia!