On December 28, 2014 the Verkhovna Rada of Ukraine adopted a number of laws which significantly amended taxation rules for Ukrainian taxpayers starting from January 1, 2015. 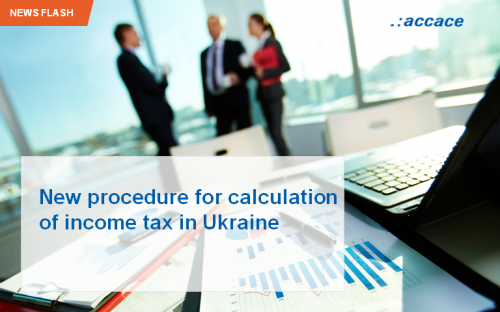 CIT shall be calculated in a new way

According to the mentioned amendments the section of the Tax Code of Ukraine related to the procedure for calculation of corporate income tax is essentially restated.

The procedure of separate business and tax accounting which had been used before is replaced by new calculation procedure based on   determination of income before tax according to the data of accounting records which being adjusted for tax differences, namely the differences which occur  when calculating depreciation of noncurrent assets, creating  reserves and when conducting  financial transactions.

At the same time the companies whose annual income from any activity does not exceed 20 million UAH may at their own discretion refuse to record difference in taxes and define taxable item only on the basis of financial result established by accounting rules taking into account the losses of previous periods. In future the taxpayer cannot refuse such decision.

The companies which have annual income in the amount not exceeding 20 million UAH are obliged to keep records of tax differences specified by the Tax Code.

The mechanism of tax accounting of securities is brought in line with their bookkeeping but negative financial result of the reporting period (losses) shall not decrease the “general” taxable item but they shall be brought forward to the following tax periods.

The Tax Code also allows to reduce financial result before taxation for the amount of negative value of the taxable activities and assets of previous fiscal years.

Starting from the corporate income tax return 2015 CIT shall be submitted till 1st of June.

The procedure for making advance payments will be the same but the Tax Code of Ukraine stipulated the phased change of the base and mechanism of advance installment payment: thus, till May 2016 inclusively the advance installments shall be paid according to the regulations that had been valid till January 1, 2015, namely:

Newly incorporated entities as well as taxpayers whose amount of income for 2014 is less than 10 million UAH and the taxpayers who transferred from the simplified into general taxation system are free of advance payments.

From June 2016 there will be a new base for calculation of monthly advance payment – it will be calculated at the rate of 1/12 of the amount of the assessed income tax for the previous reporting year reduced by the amount of the paid advance installments when paying dividends which was not taken into reduction of the tax liability.

Newly established taxpayers, entities with the amount of income less than 20 million UAH for previous year and taxpayers who transferred from the simplified to general taxation system will be free from paying advance installments in 2016.

The penalties on the basis of the results of checks of tax returns of income tax for 2015 are not applied.

More articles from the same category: