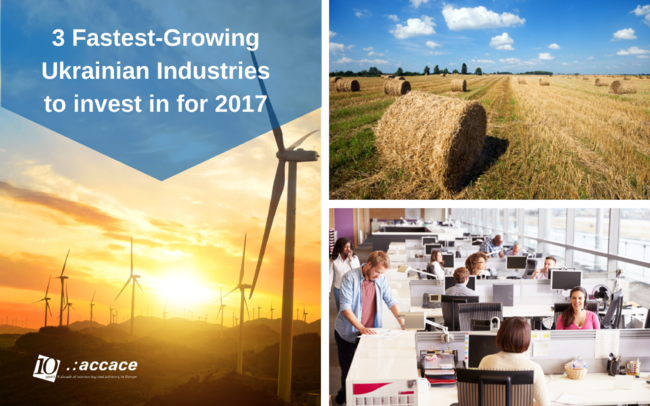 Despite the difficult time for the Ukrainian economy, investors say that Ukraine has not lost its reputation in their eyes. Yes, we are still observing a falling economy, political instability and armed conflict, and as a result is a significant rate decline in the inflow of foreign capital investments in our country. However, according to 2016 statistics, everything is not lost. So, it totaled $ 2.9 billion for the first half of 2016, according to the State Statistics Service, the inflow of direct foreign investments in the Ukrainian economy.

At the same time the pace of capital outflows gradually reduced. If during the first half of 2015 were seized $ 351 million from Ukraine, and during the first half-year 2016 – $ 330 million. Of course, we have to fight for the trust of investors, but capital flow negative trend refracted and that’s a fact.

Another question is how to retain this capital and attract new at the same time an increase in the rate of growth, because it is a lifeline for the economy. Despite the numerous promises of making regulatory and fiscal climate better, investors do not see real action from the government. On the other hand, there are many successful examples of foreign capital investments in actual working projects, which generate real cash inflow for investors.

The most prospective sectors for the investments

Ukraine is considered as a leader in investment potential in the agribusiness sector. The share of agrarians in total exports exceeds is 40%. For comparison, the share of exports of steel products is in a half less and engineering products – three times less. In addition, because of a permanent global rise of food prices, agriculture in the extremely attractive for investment industry. According to various estimates, Ukraine has from 25 to 30% of world reserves of black earth. So, it created the opportunities for growing environmentally friendly (organic) products, whose worldwide consumption is growing rapidly. Besides, we already got the experience in this field. About 400 thousand hectares of Ukrainian land are certified for organic farming. And the products grown on these lands are demanded in the European Union.

Another attractive sector for investors is the energy sector. On the one hand, it needs a major upgrade and restructuring. For example, heating systems and equipment in our country are worn by 80-85%, electricity – by 45-50%. On the other hand, rising energy costs and an increase of the deficit of traditional fuel resources (such as gas, coal) provide a powerful impetus for the development of an alternative technologies, the implementation of energy efficiency projects. For example, in Western Europe, the share of alternative energy in the overall energy balance is 30-40%, in Ukraine – is only 5-6%. But energy independence and stability play an important role in the economic health of the state. Moreover, according to the estimates of the Cabinet of Ministers, Ukraine in the foreseeable future can become not only self-sufficient in energy, but also a major exporter. For instance, the total gas reserves about 5.6 trillion cubic meters. At current levels of consumption this amount will be enough for more than 160 years.

Ukraine is a major transport and transit hub, connecting Western and Eastern part of Europe, the Baltic and South-West Asia. Firstly, our country has a very convenient access to sea routes (both on land and on water), which, provide the circulation of traffic flows from Europe and the CIS to Turkey, the Middle East and North Africa.

Secondly, the network of Ukrainian railways is about 22 thousand km, the length of roads – 170 thousand km. This powerful infrastructure network, which at the proper amount of investments for its modernization, development and maintenance (only for road repairs require 500-600 billion USD) will provide a multiple increase in traffic.

Thirdly, the EU is ready to contribute to the realization of transit possibilities of Ukraine. For example, in midsummer, Ukraine and Hungary have agreed to increase the free bilateral and transit road transport and for Ukrainian hauliers additional quotas.

IT-industry is growing in Ukraine

Ukraine has a high potential in the sphere of high technologies. IT-developments of Ukrainian origin are worldwide known. During 2015, for example, our IT sector has managed to attract more than $ 130 million of investments (in 2014, by comparison, this figure amounted to $ 39 million), and the volume of export of IT-services reached $ 2.5 billion, compete on this indicator with the agribusiness sector and metallurgy. In total, over 1000 IT-companies and more than 100 science centers are operated in Ukraine. Our universities produce 6-7 thousand professionals annually.

The possibility of IT is far from exhausted. Calculations show that the capacity of the industry in Ukraine – from $ 15 billion to $ 30 billion At the same time the full potential of IT-industry will be able to open only because of one condition: we will encourage developers to generate ideas and create products here, “home” and not seek every opportunity to develop and resell themselves abroad.

We can use the experience of Israel, which, in spite of the long war, has managed to become one of the largest IT-hub of the world and bring the economy billions of dollars as an investment. Exports of Israel’s high-tech industry reached almost $ 38 billion in 2015, and the amount of capital raised in IT-projects amounted to $ 4.4 billion. The figures speak for themselves.

Despite of the actual problems with the existing business culture in Ukraine and in order to gain access to the global resources of investors, a key priority of the Ukrainian economy is to be comprehensible for foreign capital and ensure its appropriate legal protection on the territory of our country. This will be the key to successfully attracting not just millions, but billions of dollars of investment. After all, according to research by economists, Ukraine in the next 15 years, has a good chance to get on from $ 120 billion to $ 270 billion. If conditions are completed, these figures will be real.

Extra hours – to encourage or prohibit?

on 08 August 2017, in Country guidelines and eBooks, Legal and corporate, Ukraine
Read more

10 Facts about Taxation in Ukraine | Infographic

on 21 May 2017, in Infographics, Taxation, Ukraine
Read more

The National Bank of Ukraine allowed repatriation of dividends for 2016

Minimum wage in Ukraine 2017 – What does the law say about benefits for part-time employees?