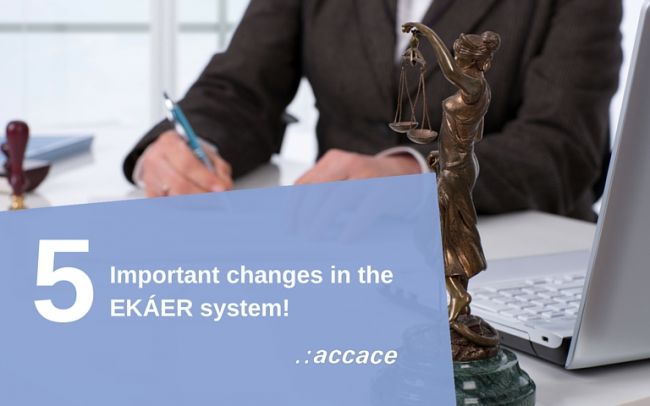 Some provisions of the Act LXVI of 2016 (called as “omnibus”) affected also the EKÁER related regulations, which will come into force from 1st August, 2016. In the following, we are going to summarize in 5 main points the new rules and where should we pay attention.

A new paragraph will be added to the Rules of Taxation, what will express the responsibility of carriers by the guarantee of the custody of the official lock. According to the justification of the amendment, the experiences of previous inspections showed that in many cases, the official lock have been damaged from unclear reasons, thereby it became necessary to tighten the rules and assign who is directly responsible. Of course, it may occur that the official lock become damaged by an accident or by any other unavoidable reason, in that case the carrier is not responsible for it, but must notify the National Tax and Customs Authority about the fact of the damage.

However it is unclear that who is defined as a private person carrier by the law? On one hand, it can basically mean a private person with a tax number or a private entrepreneur who is not working through a business organization, but it can mean a private person driver as well, who’s working for a carrier company as an employee. The first case can happen quite rarely, in the second case, the penalty seems to be a little exaggerating according to the income status of these affected private persons. The justification of the law doesn’t explain this question either, so the practice and the possible latter guidelines will provide certain guidance in the future.

3. Registration of overstated amount of goods

By the experiences of tax audits, the typical element of carousel frauds could often happen; that according to the background document the goods were transported, while the trucks made their journeys empty or half empty. For the suppression of these frauds, in case of registration of overstated amount of goods in the EKÁER system, the tax authority can impose fines for over the 40% of the value of the goods effectively NOT transported. The range of fines depends on the consideration of the tax authority and there is no minimum limit. Thus the minor anomalies (until 10% according to the regulation), does not represent any penalty risk.

4. Over packed vehicles are also subject to EKÁER

With the clarification of 22/E (1) Act on Rules of Taxation about EKÁER, transportation with over packed vans/vehicles is also got under the scope of obligations. So far, the wording of the referred act mentioned only road transportation with toll subjected vehicles, what covered vehicles over 3.5 tons of gross weight. Therefore in that case, if the vehicle was under the 3.5 tons of gross weight, it was exempt from the EKÁER liability, even if it exceeded 3.5 tons significantly due to over packing. However, from August 1st, road transportation with “vehicles weighting more than 3.5 tons “ will be subject to registration obligation, what will put an end on the possibility of tricking.

In case of violating the official lock, the National Tax and Customs Authority can withhold the transport equipment (without releasing any separate decision) until the payment of the imposed fine.

However, there are some exceptions. The vehicle cannot be retained, if

Therefore foreign carriers are in a less favorable position than domestic ones, because they can only exempt from the detention of transport equipments, if a financial institution provides guarantee, or other domestic enterprise takes over the payment obligation. Moreover, any other (owned or used) transport equipment of the foreign transporter can be retained, if he/she detains the tax office to take off the official lock. The regulation in its current form constitutes a risk for law-abiding taxpayers too, as their goods can get under withhold, if any official detention problem arises on other equipments of the foreign carrier; or if their goods are transported with goods of other taxpayers who registered them incorrectly.

If you have any additional questions about the new EKÁER regulations, our advisors would be pleased to help you!

If you have any additional questions about the new EKÁER regulations, please contact us, our advisors would be pleased to help you!