In 2015 current limitation for standard tax social privilege will remain in the amount 50% of subsistence level for able-bodied people (per month), set by the law as of January 1, 2015 of the fiscal year, i.e. UAH 609.

In 2015 the employees will pay military tax in the amount 1,5% which is imposed mostly to all payments, namely: the very salary, bonuses, leave allowances and sick leave payments.

Apart from the above mentioned, personal income is also the subject to unified social tax being paid both by employers and employees. The unified social contribution is subtracted from the employees’ salary in the amount 3,6%. 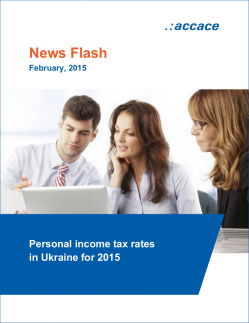 If employee’s salary is not calculated at the primary place of employment, the unified social  contribution shall be charged and paid based on the amount of the statutory minimum subsistence level per able-bodied person.
Accruals and deductions from the employees’ wages shall be made on the day of advance and salary payment.

If payroll advance payment and salary are not paid then contribution shall be settled not later than 20th day of the following month.