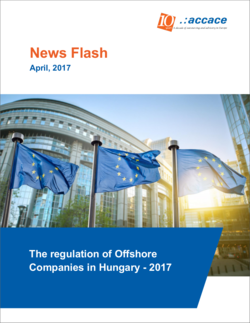 According to the amendments the Parliament accepted late last year, from the 18th of January, Hungary modified the regulations affecting the rules of the offshore companies owned by domestic individuals and their incomes originating from offshore companies and respectively put in place the rules of the new Hungarian tax amnesty. In our latest publication, we are going to try to discuss all the important details of the currently in place tax legislation.

Although this concept legally does not exist, tax haven is a country, state or territory offering little or no tax liability to foreign individuals and businesses registered domestically, but operating outside of its border.

These offshore locations, as we are already detailed it in our previous article, are not necessarily appealing because of their favorable tax structure, but rather the anonymity, complete discretion what they are offering and the unavailability in spite of official request. The latter feature is what became less and less relevant in the recent years, because nowadays there is barely any “offshore” state who did not take part in any data exchange treaty.

According the Act on Corporate Income Tax, the definition of the controlled foreign companies (CFC) had been also changed. The previous endless definition had been simplified, therefore according to the modification, from 2017 we consider a company as a CFC, if in a foreign company a domestic CIT taxpayer all by itself or collectively with its related undertakings:

and in the tax year according to its principal place of business or branch its paid tax was less than that would have been in Hungary under similar conditions. Exclusion from the scope of this, therefore the adverse legal consequences shall not apply, if in the foreign person there is a member with more than 25% share throughout the whole year who (or whose affiliated company) is already a company listed on a recognized stock exchange for over 5 years on the first day of the year.

This above condition for abroad paid CIT has to be examined in respect with domestic taxpayers’ foreign branch and if it cannot reach the half of the Hungarian CIT calculated under similar conditions,   then the disadvantageous provisions apply to it, in respect with the Hungarian taxation. The Hungarian enterprise can only possibly to get out of this if at its foreign branch it exercise a so-called substantive economic activity.

Dividends received from CFC’s won’t be deductible from the tax base and the potential loss on sale of existing shares of CFC’s are still remain a tax base increasing item. The previous rules on the unallocated revenues of CFC are still remaining in force, but the new legislation made up some modifications in them. Those CFC revenues must be considered s a tax base increasing item which:

In order to harmonize with the EU directives, it was reasonable to take out the rules of CFC’s from the Act on Personal Income Tax. Therefore, the previous provisions on the unallocated revenues and other incomes had been repealed.

However in order to an effective action against the tax avoidance, the punitive regulations must be still used on offshore companies who have a seat in a non-agreed, low tax rated country. Those associations are uniformly called as „persons with seat from a low-tax state” and interests, dividends and exchange-rate gains are still considered as other incomes, therefore on the whole it means a total of 30% tax rate. Although those incomes which originating from countries which Hungary signed conventions for the avoidance of double taxation, are still cannot be considered as these kinds of incomes.

If you are interested in this topic or you need more detailed information on offshore companies in connection with corporate tax or personal income tax, please read our previous articles or feel free to contact us, our proficient advisors would be pleased to answer your questions.

Let’s talk about how we can work together!