We bring you an overview of tax news that have recently entered into force, as well as legislative amendments that are currently in the approval process and which are expected to take effect from next year.

With effect from 26 September 2020, the real estate acquisition tax was abolished. This change has retrospective effect and applies to acquisitions for which the title was registered in the Real Estate Register from 1 December 2019 and later. In case the tax has been already paid, the taxpayer could be refunded on the basis of the official request submitted to the Czech tax authority.

Following the abolition of real estate acquisition tax, additional changes in the area of income taxes have also been made: 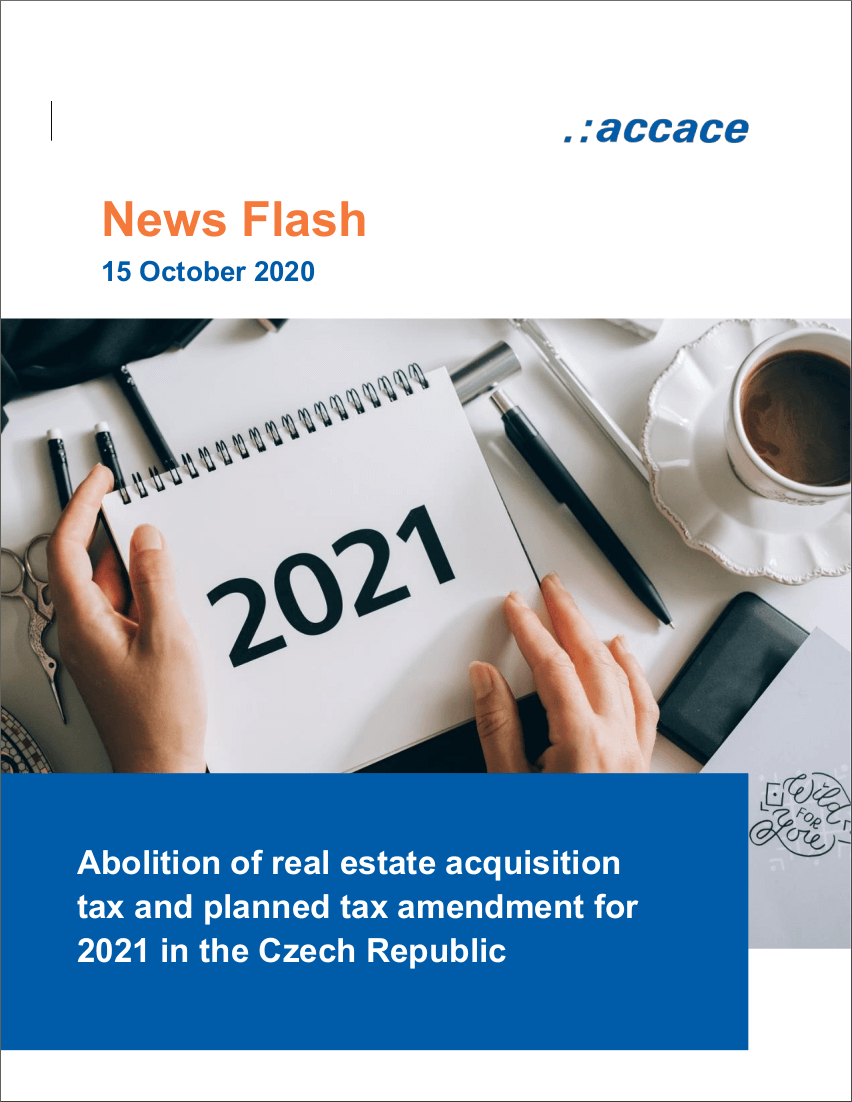 1. Extension of the time test for exemption income from sale of immovable items

The time test for exempting income from the sale of real property not used / not intended for residential purposes was extended from 5 to 10 years. The extended time test will be applied to sales of real property acquired after 1 January 2021. The exemption should, however, remain even before elapse of 10 years if the proceeds from the sale are used to satisfy the taxpayer´s own housing needs.

2. Decrease in the maximum limit for interest deduction

Furthermore, the maximum limit for the deduction of interest on a mortgage loan was reduced from CZK 300,000 to CZK 150,000 per year. This change applies to interest on mortgage loans concluded from 1 January 2021.

The Ministry of Finance has submitted a proposal for tax amendments with the suggested effect from January 2021. This proposal has currently passed its first reading in the Chamber of Deputies and includes changes in the area of income taxes and real estate tax.

Below we summarize the most important tax changes currently under discussion:

First change represents for taxpayers more or less a confirmation of existing practice and enhances the importance of the information contained in the land register. For the purpose of determining land tax, the type of land registered in the land register should be decisive, regardless of whether it corresponds to the actual state of use or not.

From 2021, employers could provide their employees with contributions for meal allowances in monetary form.  The ministry intends to provide an alternative method to the already existing possibility of providing meal allowances in non-monetary form i.e. meal vouchers (companies may save on commissions associated with the provision of meal vouchers). The tax impacts of both forms, however, are similar. According to the proposal, the monetary contributions would be treated as a tax-exempt income up to 70% of the meal allowance amount on the employee’s part. The contributions could be provided up to the upper limit of the meal allowances for a business trip lasting 5 – 12 hours per shift which amounts to CZK 72.10 for 2020. The exemption will be valid only for one type of contributions, namely monetary or non-monetary. On the employer’s part, the contributions would be treated as a tax deductible expense with no limitation and thus would not be subject to tax or social security and health insurance premiums.

According to the current provisions, taxpayers are obliged to report income paid to abroad that exceed CZK 100,000 per month. In order to reduce the monthly administrative burden associated on both taxpayers and tax administrators, the ministry has proposed to increase the limit to CZK 300,000. However, this would be applicable only for income exempt or not subject to taxation in the Czech Republic. Hence, the reporting of income paid to abroad that is taxed using withholding tax on a monthly basis remains unchanged. Income that exceed the suggested monthly limit would no longer be reported monthly, but only once a year by the end of January of the following year. The annual report would include income for the months in which this limit was exceeded

The government has decided to proceed with the long-promised abolition of the super-gross wage, while at the same time introduce progressive taxation at rates of 15% and 23% for all types of income. The higher rate would be applied on gross income that exceed 48 times the average wage (for 2020, the amount of CZK 1,672,080). According to the recent debate, the abolition would be only for two years.

Furthermore, following additional changes regarding to tax depreciation of assets have been incorporated into the tax amendment for 2021 thought amending proposals:

Abolition of the tax depreciation of intangible assets

Besides above, the amendment contains other tax changes (such as change in taxation of discounted bonds, cancellation of exemption of Czech non-resident´s interest income from so-called Eurobonds etc.).

We will keep you updated on the further development and final form of the tax amendment in question.

How to correctly calculate the average earnings in the Czech Republic? | News Flash