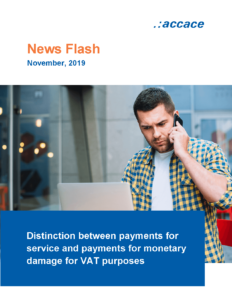 In the case of early termination of contracts, the question of proper assessment of agreed payments between parties for VAT purposes is quite often. In this context, we would like to draw your attention to the judgment of the European Court of Justice (ECJ) in case C-295/17 MEO – Serviços de Comunicações e Multimédia SA concerning the early termination of a contract for telecommunication services with agreed a minimum commitment period.

In the judgment C-295/17 the ECJ considered, whether in certain circumstances, the amount charged by a telecommunications service provider to a customer upon early termination of a contract with agreed commitment period could be considered as a service provision, which the customer chose not to use and therefore a transaction subject to VAT.

Furthermore, the ECJ also answered the question, whether the determination of transaction for VAT purposes could be affected by the reasons which led the provider to set the amount for disregarding the tie-in period, the calculation method of brokerage commission from contracts with commitment period or the fact that the invoiced amount is classified as a contractual penalty under national law.

Compensation in the case of non-use of provided services

The Portuguese company MEO provides telecommunications services (television, internet access, mobile network and fixed network) to customers on a contractual basis, some of which provide for minimum commitment periods, while offering its customers favorable terms.

However, the ECJ rules that such transaction represents consideration for provided service and as such is subject to VAT.

In its arguments, the ECJ also referred to previous judgments relating to compensation for failure to use the services provided.

In the light of arguments, received compensation cannot be considered as compensation for damage because MEO does not suffer any damage from the early termination of the contract, as MEO receives the same amount as it would have done if the contract had been fulfilled.

Therefore, in the absence of harm, a grant of compensation would be unjustified.

Consideration for service regardless of the usage time

The ECJ also pointed out that the consideration for services was already identified in the contract at the time of its conclusion, regardless of the duration of the real customer’s use of the service.

According to the ECJ, from an economic point of view, the amount due for non-compliance with the minimum commitment period must be considered an integral part of the total price paid for the services, divided into monthly instalments, which amount becomes payable immediately in the case of failure to pay.

The last „indemnity“ must be regarded, in economic terms, as merely the last of the previous monthly payments and just like the previous payments, it is payment for services previously supplied, while the moment of payment cannot alter the nature of the service.

The ECJ rules, that the payment of a pre-determined amount in the case of early termination of a contract, which corresponds to the amount that the supplier would have received during the rest of the minimum commitment period, constitutes consideration for a supply of services subject to VAT.

Impact of other factors on the classification of the transaction

The fact that the purpose of the lump sum is to discourage customers from early termination of a contract and to make good the damage that the supplier would suffer, has no impact for classifying the transaction.

It is also irrelevant, whether the amount may be regarded, under national law, as a contractual penalty.

Main statements and payments due in September 2019

Main statements and payments due in August 2019

Main statements and payments due in July 2019

Main statements and payments due in June 2019

Main statements and payments due in May 2019