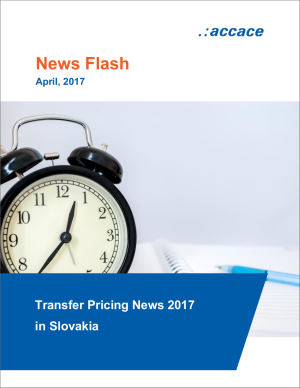 We would like to draw your attention to the most important changes in transfer pricing effective as of 2017 in Slovakia, that were introduced by the amendment to the Income Tax Act. The most crucial changes are related to stricter penalties for breach of the arm ́s length principle, to the new definition of the terms “controlled transaction“ and “related party” as well as to the new fees for Advance Pricing Agreement (APA).

Introduction of a term ”controlled transaction”

In the context of the amendment to the Slovak Income Tax Act, the term “mutual business relationship”, was currently replaced by the clearly defined term “controlled transaction“. The reason was mainly the ambiguity in the interpretation of the term.

Moreover, the term “controlled transaction” was introduced also in the OECD Transfer Pricing Directive. The new Income Tax Act contains definition what the control transaction means and which transactions of the parties are considered to be controlled.

In this context, it is worth stating that the transactions such as renting a real estate if the lessor doesn´t have this real estate in his business property and the lessee will be a natural person who uses it for personal purposes will not classify as a controlled transaction.

As of January 1st, 2017 stricter penalties apply for intentional breach of the arm ́s length principle.

A  taxpayer  who  is  by  means  of  transfer  pricing  deliberately  decreasing  the  tax  base  or increasing the tax  loss  shall  pay  stricter  penalties.  Such taxpayer will in this case pay twice as much.  However, if  the  taxpayer  recognizes  the  breach  and  pays  up  the  rest  of  the  assessed  tax  in  the  given  amount, the stricter  penalty  will  not  apply.

Stricter  rules  apply  on  the  additionally  assessed  tax  from  the tax control which  started after  December  31, 2016.

The fee for applying for the APA – as of January 1st, 2017 – no longer depends on the value of the business case, but is to be set as follows:

This change eliminates potential application problems in determining the value of a business case for given purpose.

Please note that only the method can be approved with the APA, not the used transfer prices itself.