We would like to inform you about the most significant legislative changes in Slovakia, introduced by the amendment to the Income Tax Act (ITA) from year 2023.

We would like to draw your attention in particular to the changes in the area of taxation of bonds flowing to non-residents and increased amount of tax bonus for child and transfer pricing in Slovakia, which will be in force from year 2023. The changes regarding the rules for limiting of tax deduction of interest costs have been approved with a postponed effect from year 2024. The amendment to the ITA was approved by the Slovak Parliament on December 6, 2022. 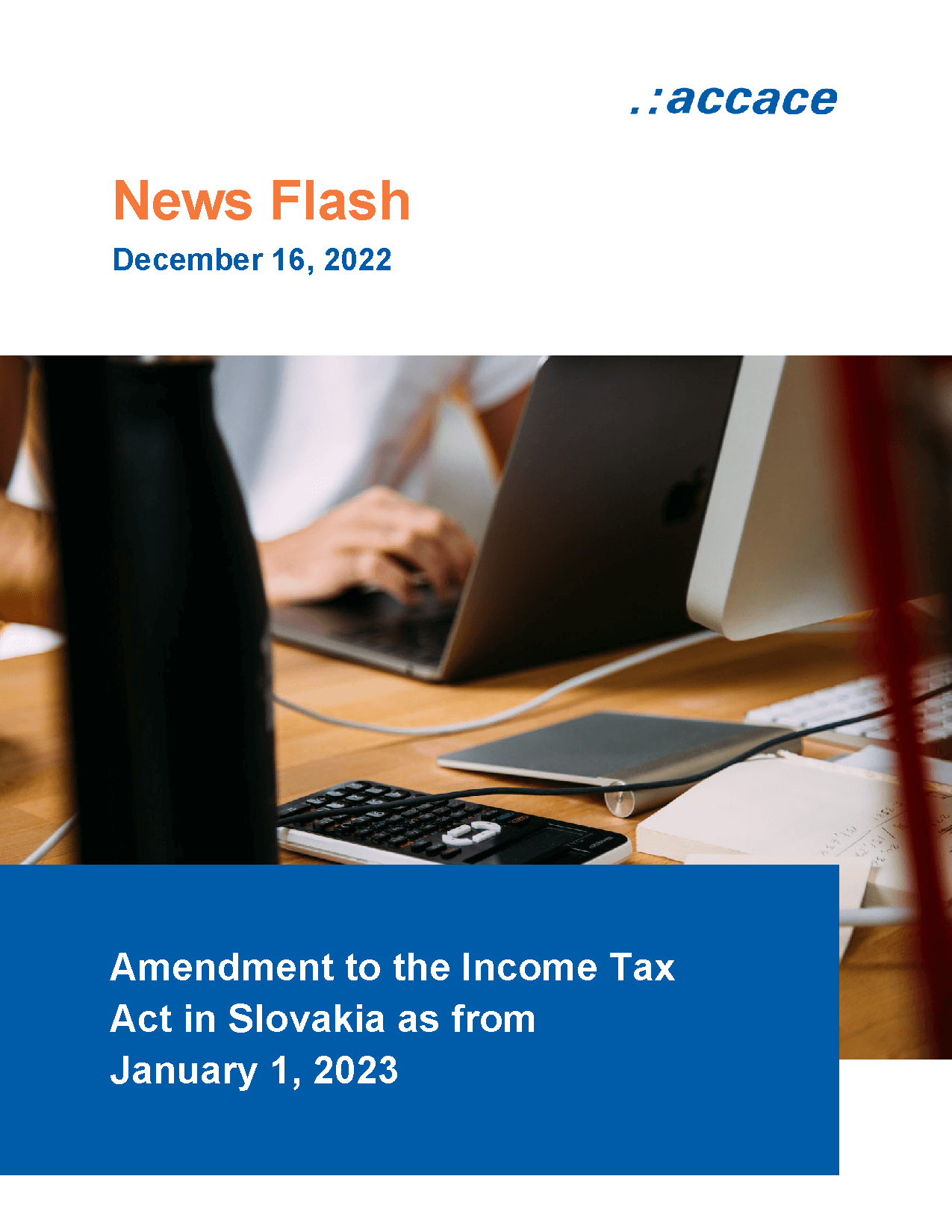 A reference to the OECD Transfer Pricing Guidelines for multinational companies is added to the provision of the ITA. In a situation where the price used by the taxpayer in a transaction with related parties is not set on the arm´s length principle and is outside the range of established independent (market) comparable values, the tax authority will be allowed to determine the transfer pricing adjustment during the tax audit at the level of the mean value (median) determined based on the benchmark analysis, unless the taxpayer demonstrates that given specific circumstances, an adjustment to another value within the range of independent values ​​is more appropriate.

According to the new rules, yields of the bonds flowing to a taxpayer with limited tax liability (tax non-resident) from sources in the territory of the Slovak Republic will represent income that will be subject to taxation in Slovakia.

Payment of coupons from bonds held by tax non-residents will not be taxed in Slovakia if the conditions for tax exemption are met in the case of related persons (e.g. parent-subsidiary relationship) with ownership of at least 25% of the share capital for at least 24 months or if the relevant Double Taxation Treaty did not grant the right to tax the Slovak Republic.

By transposing the EU Directive 2016/1164 (hereinafter referred to as the “ATAD” Directive), a new rule on the limitation of interest costs in relation to creditors (§17k ITA) is introduced into the Income Tax Act, which is to be effective from January 1, 2024.

The new rule on the limitation of tax deductibility of interest costs will be applied only if the amount of net interest costs is higher than EUR 3,000,000 = so-called safe harbor.

We would like to point out that all interest costs and revenues are considered, not only toward the related parties.

For example, it applies if net interest costs are negative, i.e., taxable interest revenues are higher than tax-deductible expenses, then the taxpayer does not comply with the new rule and all interest costs are treated as tax deductible, unless they are limited by the thin capitalization rules.

As from January 1, 2023 the amount of tax bonus for dependent child is again amended as well as other conditions for its claim and paid out.

Further, the bonus for child is limited up to the amount of set percentage of tax base (partial tax base) and based on the number of dependent children of the taxpayer.

Exemption from non-monetary payment for doctors

In order to support future doctors, the amendment of the provision concerning health care providers was reflected in the ITA through the amending proposal of the deputies.

Non-monetary benefits provided to the health care provider in the form of transportation and accommodation in connection with the required continuing education will also be exempt from income tax.

In connection with the adopted law on the solution of impending bankruptcy in preventive proceedings through a set of restructuring measures, the ITA adds the possibility of creation of tax provisions for  receivables and the write-off of receivables in the case of preventive restructuring.

Tax deductibility of technical reserves in the insurance industry

The method of registering taxpayers for income tax purposes is being amended. The tax authority will register taxpayers ex officio for income tax registered in the register of legal entities, entrepreneurs and public authorities.

The tax authority will register taxpayers for income tax registered in other registers than the commercial and trade registers, based on a notice that will be published on the website of the Financial Directorate of the Slovak Republic.

If you are interested in more information on any of the topics, do not hesitate to contact our tax advisors in Slovakia.