Regarding the end of the transition period on December 31, 2020 provided for in the Agreement on the leaving of the United Kingdom of Great Britain and Northern Ireland (“UK”) from the European Union, below, we bring you an overview of the most significant changes in the tax and customs legislation which will apply from January 1, 2021 to the transactions with the UK.

Based on the agreement between the UK and the EU, after the UK left the EU, so-called transition period was applied during which the UK continued to be considered as a member state of the EU in the area of taxes and customs. This transition period ends on December 31, 2020 and it leads to several significant changes, in particular in the area of customs and customs duties, VAT regime of the transactions between the EU member states and the UK and related reporting obligations. 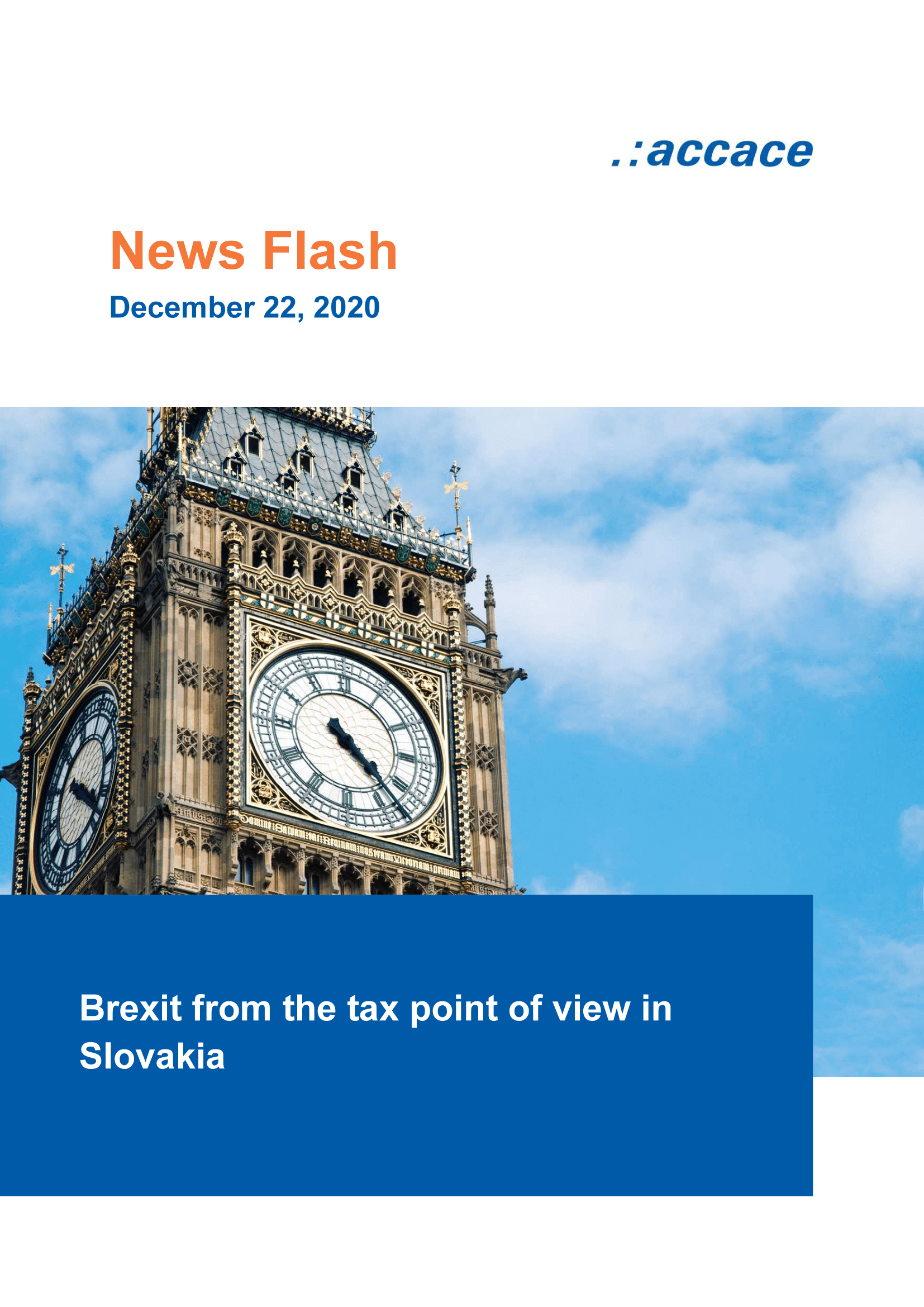 Brexit with or without a deal?

Considering the fact, that several days remain until the end of the transition period, it is unlikely that a trade agreement will be concluded by this date. Companies trading with counterparty from the UK (mainly with goods imported or exported to the UK) should be prepared for the fact, that from January 1, 2021, such transactions will be subject to the same rules applied to the transactions with the third countries, including customs controls and customs payments on exports and imports of goods.

In addition to other customs obligations, we would like to point out that the entities cooperating with the counterparty from the UK will have to be assigned so-called EORI, since every participant in the customs procedure must have it assigned. Entrepreneurs who plan to trade from the new year with the UK must apply to the Financial Directorate of the Slovak republic for the EORI number.

The impact of Brexit on VAT returns and EC Sales List

Export of the goods to the UK after the end of the transition period will no longer be considered as a supply of goods to another EU member state, but the goods will be exempt from VAT if the standard conditions are met. Due to this reason, the export of goods to the UK will not be included in the EC Sales List, but only in the relevant line of the tax return.

Similarly, imports of goods from the UK will not be considered as acquisition of goods from another EU member state, but it will be a subject to VAT within a customs procedure.

VAT refund from the UK

For the period of 2020, the VAT payers may apply for the VAT refund paid in the UK in the standard electronic way no later than on March 31, 2021. The deadline is relatively strict compared to the standard deadline of September 30 of the following calendar year, which applies to the application for VAT refund paid in other EU member state and until the end of the transition period was also applied to the VAT from the UK. The same deadline for submitting the application for VAT refund paid in the EU member state for the mentioned period will apply to VAT payers established in the UK.

It will no longer be possible to apply for the VAT refund paid in 2021 in the UK, as has been the case do far, but it will be necessary to validate the method and conditions under the UK legislation, which can cause significant complications for the entrepreneurs in the EU.

VAT and customs exception for the Northern Ireland

Please note that the exception only applies to the transactions of goods; in the case of services with the counterparty from the Northern Ireland, they will be subject to the same VAT rules as applies to the third countries. This means, that the delivery of the service to the customer in the Northern Ireland will not be included in the EC Sales List.

At the same time, the so far unused country code ”XI” is being introduced, which will be used for deliveries of goods to the territory of Northern Ireland in the EC Sales Lists and Intrastat declarations.

The taxable persons established in the UK or in other third countries who will be interested in using the so-called mini one stop shop scheme (“MOSS”) from January 1, 2021, for the provision of telecommunications services, TV and radio broadcasting services or electronically supplied services to the non-taxable person from the EU member states will have to register with the MOSS scheme in the EU member state; they will no longer be able to be registered in the UK.

The taxable persons currently registered in the MOSS scheme who will provide the telecommunications services, TV and radio broadcasting services or electronically supplies services after December 31, 2020 to the non-taxable persons in the UK, will no longer be able to use the MOSS scheme. They will have to comply in accordance with the legislation valid in the UK.

From January 1, 2021, the UK will no longer be considered as a taxpayer of EU member state or as a taxpayer of a state who is a contracting party to the EEA Agreement. The exclusion of the UK from this group will affect the application of certain provisions of the Income Tax Act, and transactions with the UK will no longer be eligible for certain benefits granted by the Income Tax Act to the transactions until the end of the transition period as EU member state.

The assessment of tax obligations in the area of direct taxes will have to be based on the valid Income Tax Act and the valid Double Tax Treaty concluded between the UK and the Slovak republic.