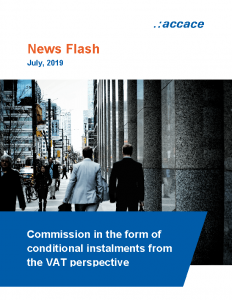 We would like to inform you about a case concerning the VAT payable on the agency business services with the conditional commission instalments that was recently decided by the European Court of Justice (ECJ).

In the judgement in case C-548/17 of 29 November 2018, the ECJ deals with the question whether it is in accordance with the VAT Directive that taxable transaction and tax liability related to the agency business services including the placement of the professional football players with the football clubs for which the commissions in the form of conditional instalments are being paid during the years following the successful placement of the payer, could arise when the player is placed.

This case concerns the German company that provides the agency business services for professional football players.

This company receives the commissions from the football clubs for the placement of the football player with the club, provided that the player subsequently signs an employment contract and holds a German Football League license.

Such commission is paid to the company in instalments every six months when the conditions of signed contract and holding of license are met.

Taxation of turnover from commissions

The company taxed its turnover for the period of 2012 based on the received remuneration. In 2015, following a tax inspection, the Tax Authority stated that the company should paid tax on commission payments as from 2012 corresponding to fixed-term player contracts terminated during 2015, and issued an adjusted tax notice.

The Tax Authority appealed against the judgment to the Federal Finance Court that asked the ECJ to provide the interpretation of the Article 63 and Article 64/1 of the Council Directive 2006/112/EC on the common system of VAT (thereinafter “VAT Directive”). The Article 63 states that taxable transaction occurs and tax liability arises by supplying of the services.

In addition, the Article 64/1 states that in case of successive charged services or successive paid services, the services are considered to be supplied in that moment when the period to which such payments are related passed.

According to the ECJ, the agency business services of placement of the professional football player with the club for certain number of seasons, for which the remuneration is paid in the form of consecutive and conditional commissions over several years following the placement of the player, is in line with the interpretation of the Article 64/1 of the VAT Directive on successive payments.

The ECJ in this judgment decided that in this case the taxable transactions occur and tax liability arise not in the moment of providing the agency services for professional football players, but on expiry of the periods to which the payments made by the club relate.

According to the ECJ, the respective articles of the VAT Directive must be interpreted as precluding the chargeable event and tax chargeability on the supply of agency services for professional football players for which the remuneration is paid in the form of consecutive and conditional commissions over several years further to the placement of the player with the club, from being regarded as occurring or taking effect when the player is placed.