Adjustment of the tax residence 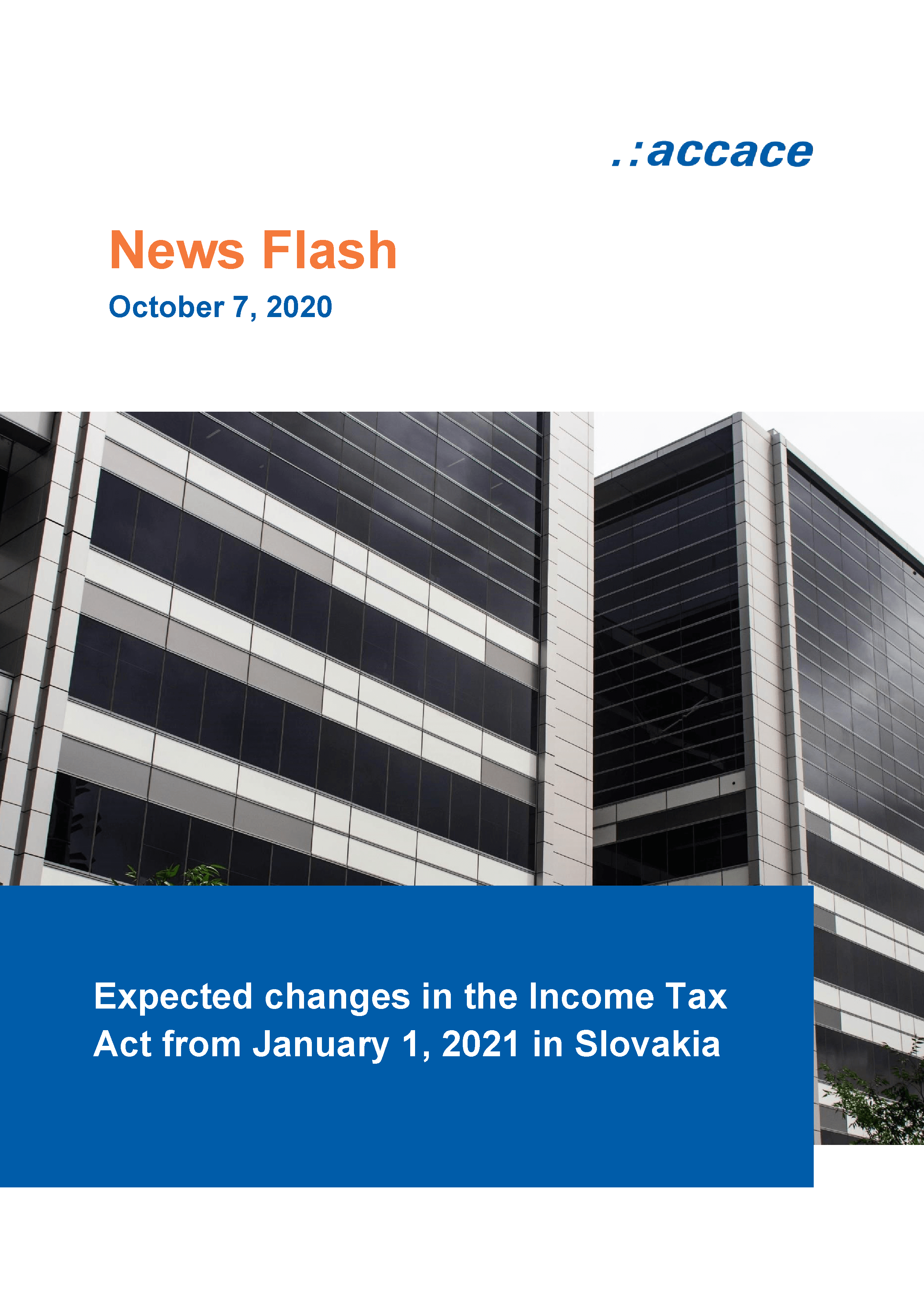 Besides, the definition of the place of the effective management of a legal person for the purposes of determining tax residence is clarified. The place of effective management is considered a place where most of the business and management decisions are made or taken on behalf of the legal entity, regardless of who makes these decisions. Decisions for smaller organisational units of legal entity or decisions of an administrative nature cannot be considered as decisions of this character.

In connection with the implementation of Council Directive (EU) 2017/952 (the so-called ATAD 2 Directive), the proposed act supplements the Income Tax Act with legislation concerning a reverse hybrid entity.

At the same time, the definition of a transparent company is being introduced, i.e. a company that is taxed only at the level of shareholders, which are mainly general partnerships and limited partnerships in Slovakia, or to a lesser extent other entities without legal capacity or with legal capacity taxed at the level of shareholders or income receivers (e.g., funds).

A reverse hybrid entity is referred to a company that is considered as a transparent company in the country of incorporation, but according to the country of incorporator such company is considered as non-transparent. This could lead to a situation where income is not taxed at the level of the transparent company nor at the level of the shareholder (partners) of the company.

Pursuant to the new provision of the Income Tax Act for a reverse hybrid entity, the incomes attributable to foreign (non-resident) shareholders meeting the criteria of 50 % or more in relation to transparent companies will be taxed at the level of a transparent company at corporate income tax rate of 21 %, if these incomes of the non-resident cannot be taxed through a permanent establishment in Slovakia according to Section 16(3) or according to Section 16 of the Income Tax Act and the incomes will not be taxed in the country of residence of the non-resident, nor abroad. Foreign shareholder of transparent companies will be subjects to additional notification obligations.

The subjects of collective investment that have a wide range of unit-holders where the ownership of the fund is dispersed and where no unit-holder has a controlling interest, diversified portfolio of securities and are subject to investor protection regulation in Slovakia are granted the exemption to the application of this provision.

The provisions concerning the tax regime of a reverse hybrid entity shall apply for the first time in a tax period beginning on January 1, 2022 at the earliest.

In order to limit a tax avoidance and to tax in Slovakia shares in profits (dividends) of a foreign company or of an entity, whose income weren´t tax at least at the minimum effective tax rate or are domiciled in non-cooperating countries, the amendment to the Income Tax Act shall introduce rules for controlled foreign companies (so-called CFC rules) from January 1, 2021, even for natural persons.

The new CFC rules will apply to the direct and indirect participation of a natural person in a foreign controlled company, while the income is allocated from the economic result as reported abroad. Income taxation is proposed through a separate tax base, similar to dividends, while the same tax rates as for the taxation of profit shares are applied, i.e. 7 % or 35 % for non-cooperating countries. The taxpayer will be able to set off the tax paid in the following tax periods when the dividends are essentially paid.

Performances provided under an active labour policy for projects to support the retention of jobs and to support the retention of employees in connection with the declaration of an extraordinary state or emergency state shall be exempt from income tax, both employers who are natural and legal persons. Pursuant to the proposed transitory provisions, this provision will apply for the first time when submitting a tax return after December 31, 2020, i.e., most employers will be able to use the exemption also for allowances they received during 2020 under measures to avoid negative effects of COVID-19 pandemic on the business environment.

Regarding the exemption of allowances, it is essential to point out that it will be needed to exclude expenses linked to exempted income from the tax base.

In the case of advances on corporate income tax, the obligation to pay the difference on tax advances paid from the beginning of the next tax period to the deadline for submitting a tax return should be cancelled from January 1, 2021, in case that on the basis of the submitted tax return, the taxpayer would be obliged to pay higher tax advances for the following tax period.

Changes in the case of application of employee tax benefits

With the effect from January 1, 2021, an employee may ask any employer for the annual settlement, who is a taxpayer and who has paid him a taxable wage during the tax period.

The registration of taxpayer ex officio should be postponed from January 1, 2021 to January 1, 2022 due to technical reasons of the Financial Administration and the individual registers. The current method will be valid until December 31, 2021. The same postponement is proposed for the notification of changes which should take place automatically from January 1, 2022 based on data change in the relevant registers (e.g. change of registered office, name, etc.)

From January 1, 2021, the obligation to register taxpayers who have a business license granted in another state, but due to the existence of a place of effective management in Slovakia, they are taxpayers with unlimited tax liability in Slovakia.

Contact our experts to help you with any tax and other inquires!