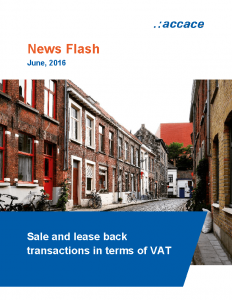 We would like to briefly outline the recent case of the European Court of Justice (ECJ), which dealt with the sale and lease back of capital goods in terms of VAT. The ECJ dealt in the Case C-201/18 Mydibel SA with a question whether there are from the VAT point of view two separate transactions or a single transaction, a financial transaction.

Adjustment of deducted VAT because of sale and lease back transaction

In the Case C-201/18, the ECJ dealt with the issues concerning the adjustment of VAT deducted from the real estate, which was the subject of sale and lease back transactions which were not subject to VAT.

In the given case, the Belgian company Mydibel owned the real estate, where applied a deduction of VAT on the invoices for their construction, rebuilding and renovation.

In order to increase liquidity, Mydibel entered into a sale and lease back transactions with two financial institutions, not subject to VAT and relating to this real estate.

On the one hand, Mydibel concluded a contract for the establishment of a long-term lease for 99 years in favor of these financial institutions for the immediate payment of the rent.

On the other hand, Mydibel entered into a leasing contract by which financial institutions abandoned the right to use the real estate to Mydibel for 15 years without the possibility of terminating the contract for the payment of a quarterly rent corresponding to the previously mentioned rent payment plus interest. According to the latest lease contract, Mydibel also has a call option after the lease contract expires.

The principle of VAT neutrality and equal treatment

After the tax audit, the Belgian Tax authority requested the adjustment of the deducted VAT initially applied to the construction, rebuilding and renovation of the buildings in question.

Subsequently, the case was brought to the Belgian court, which referred questions for a preliminary ruling to the ECJ on whether the rules of Council Directive 2006/112/EC on the common system of VAT impose an obligation to adjust the deducted VAT initially deducted correctly and whether the imposition of such an adjustment is in accordance with the principle of VAT neutrality and equal treatment, given that:

The number of transactions

The ECJ assumed that real estate to be capital goods because it fulfilled the definition of capital goods according to which it is goods used for economic activity and is characterized by a constant nature and value.

According to the ECJ, it was necessary to determine whether it was one or two separate transactions.

According to the ECJ, these transactions cannot be considered as ‘supplies of goods’, since the rights transferred to financial institutions as a result of these transactions, namely the civil rights of long-term lease reduced by the leasing rights of Mydibel, do not entitle those institutions to dispose of the immovable property in question as if they were their owners.

In the given case, the ECJ concluded that the sale and lease back transactions were closely linked together and constitute one inseparable economic transaction.

The ECJ further stated that it was purely a liquidity-enhancing financial transaction, whereby the property was held by a company that used it continuously to perform an economic activity, therefore these transactions could not be considered as a supply of capital goods and therefore no adjustment of the deducted VAT was required.