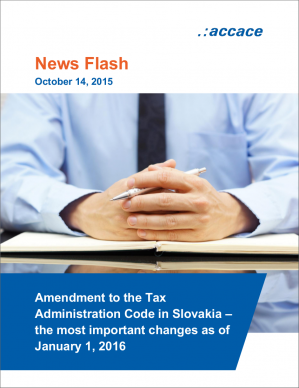 We would like to inform you that the amendment to the Tax Administrative Code was approved in September 2015 by the National Council of the Slovak Republic. The main aim of the amendment is to encourage entrepreneurs to fulfill their tax obligations in more proper and timely manner. Read the overview of the most important changes that come into force on January 1,2016.

The main reason for  the amendment to the Tax Administration Code in Slovakia is introduction of so-called time aspect by imposing fines.

Under the new wording, following measures will be effective: if tax administrator imposes tax or tax difference based on the results of tax audit, he/she will impose the fine calculated by annual rate 10% (taking into consideration the current interest rate level of the ECB) from the supplementary assessed tax for every day after the original due date of the tax.

One aggregate fine for breach of more tax obligations

As of January 1, .2016 also so-called principle of absorption will be introduced, i.e. in event of breach of several administrative offences by one person, for that a fine is determined in range, only one fine will be imposed.

Such filing will be “rewarded”  by more favourable fine that will be (by taking into account the current rate of ECB) in the amount of 7% p.a. – in comparison to 10% p.a. that would be imposed by tax office based on results of the tax audit.

Also changes related to the disclosure of tax debtors will be a part of the amendment. These provisions will be effective as of May 1, 2016.

The list of tax debtors published on the website of Financial Directorate of the Slovak Republic will be updated on monthly basis while only taxpayers will be disclosed whose total amount of tax arrears exceeds 170 EUR.

When speaking about  amendment we would like to draw your attention also to amended rules on electronic delivery of documents by tax authority towards taxpayers.

The transmission of delivery of documents by electronic means will be done gradually, latest on January 1,2016.

Read more about other legislative changes in Slovakia: